New Trend: Being Green Even Into Retirement 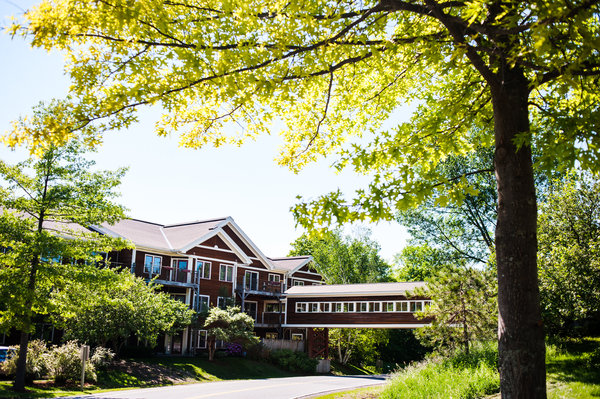 Pictured Above: Wake Robin uses 20% of its electricity from solar panels, meat and produce are from local farms and 50,000 ladybugs act as natural pesticides.

A DIE­HARD community gardener and composter, David Conrad, 77, wanted to age in a retirement community that complemented his love of all things green. So seven years ago, he and his wife, Sally, moved to earth­friendly Wake Robin in Shelburne, Vt. Now Mr. Conrad spends his days managing the Wake Robin recycling campaign, along with working in the community garden and walking the community’s four miles of wooded trails. Other residents make maple syrup or tend beehives that produce honey, which is bottled and sold. “I wanted to live in a place that’s healthy,” says Mr. Conrad, who is a retired college professor. “So sustainability is very important. We like to think that we’re leading the way.” Green do­gooders like Mr. Conrad are indeed forging a new path for retirees. Though eco-­conscious retirement communities are still rare in the United States (exact figures are scant), they are expected to grow in number as baby boomers age and seek healthier, greener alternatives.

“Moving forward, in the next 20 years, these green communities will become the standard,” said Andrew Carle, director of the senior housing administration program at George Mason University in Fairfax, Va. Lots of green communities are in the development stage, said Jamie Hopkins, associate professor of taxation at the American College of Financial Services. But for now, there’s more need than supply, especially as baby boomers age. Some places even have five­ year waiting lists, he said. These lush facilities offer lots of unseen benefits. Carbon footprints are reduced with energy­ and water ­saving initiatives, including geothermal heating and low­ flow toilets. And older people can enjoy environmentally friendly buildings that typically offer airy spaces with more natural light and indoor furnishings that use far less toxic materials. These communities can also reap subsidies and incentives that might provide more motivation to make the upgrades, experts say.

The biggest challenge, though, is wading through the gray policy areas of green standards. So Mr. Hopkins recommends making sure there’s enough evidence to back up actual claims. “Eco-­friendly doesn’t mean a lot,” he said. “And some places just use buzz words.” For example, some so­ called eco­friendly communities may have golf courses, which use lots of water. Two types of official green standards can serve as guideposts, though. The first, said Mr. Hopkins, is Energy Star ratings on appliances, which is a government label that designates energy efficiency. Second is a community’s LEED certification, Mr. Hopkins said. It’s a widely recognized program put together by the U.S. Green Building Council to create healthier, more energy­ efficient buildings.