The Presidential Campaigns are upon us and one of the first big issues is the environment and renewable energy. The Waste to Energy Systems team is proud to be a part of the environmental movement and excited that it is one of the first topics being discussed by many candidates. The one receiving the most press for her renewable energy plan is Hillary Clinton with her aim to have 33% of the U.S. energy coming from renewable sources by 2027… that’s only 12 years away with a 20% increase. Below, the main two goals of Hillary Clinton’s plans are discussed.

From the Guardian article “Is Hillary Clinton’s ambitious solar energy goal for the US workable?”

On Sunday, Hillary Clinton took a first swing at the many-headed carbon hydra. By the end of her first term, she said, the US would have seven times more solar energy capacity than it does today. And by 2027, renewable energy would supply a third of the nation’s electricity.

Clinton’s announcement, which the campaign said would be the first of many on climate change from the presidential hopeful, extends the carbon-saving ambition in a significant sector of the economy. Burning fossil fuels for electricity accounts for 31% of US greenhouse gas emissions. One estimate found Clinton’s 33% renewable target could slice another 4% off the US’s existing pledge to cut emissions by 26-28% by 2025.

Bloomberg New Energy Finance’s Americas chief, Ethan Zindler, said the ambition was high, but within reach. “It appears to be on the upper end but it’s entirely doable given the rapidly improving economics of renewables generally and solar particularly.” The momentum is already swinging towards low carbon electricity. Barack Obama’s Clean Power Plan, due for activation in August, is predicted to push the renewable sector from its current 13% share of the electricity market to 25% by 2027. 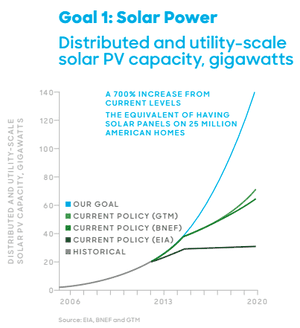 In 2015, solar photovoltaic installations are forecast to rise by 27%, according to the Solar Energy Industries Association (SEIA). This rise has been aided by the soon-to-expire solar investment tax credit (ITC), which the industry said Clinton will have to revive.

“Clinton’s ambitious goal for solar is only possible if solar continues its impressive trajectory. SEIA is working to extend the solar ITC and remove statewide barriers that inhibit the growth of solar,” said SEIA president and CEO, Rhone Resch.

Stay tuned for our next blog and the rest of the article.