How Can Ancient Farming Methods Help With Climate Change?

Technological advances have helped the world in many ways from longer life expectancy to space exploration. However in some areas, new technology may increase efficiency and mass production but it also harms the environment. One big area of debate is farming, sustainable vs. industrial. An important question in this debate is what methods did ancient farmers use for thousands of years in harmony with the environment and could they still hold merit in today’s world, particularly with the climate issues.  A recent article from www.worldwatch.org discusses this very topic.

Spanish conquistadors had great respect for the crops developed by the indigenous farmers of the Americas. A full 60 percent of the food eaten today worldwide originated in the region. But the conquistadors failed to appreciate the importance of the production methods used by those innovative local farmers.

There are over 600,000 hectares of terraces in Peru alone. Many of these are still in use today. They were constructed with rock fill at the bottom, between the rock face and the slope, to allow for good drainage. Most were built with stairs for ease of access.

Indigenous American crops were introduced in colonies around the world. But the farmers’ innovative production methods were shunned and, for the most part, lost to the world for 500 years. Serious efforts to rediscover these methods have only begun during the last few decades.

Sophisticated hydraulic engineering projects can be found, on a massive scale, in the Andes Mountains and along the Pacific Coast of South America, developed by people who had no metal tools. Using only simple devices and their own manual labor, these farmers built thousands of hectares of terraces in the mountains and thousands of giant water-trapping depressions (Qochas) in the high plateaus.

In Bolivia’s Altiplano, hundreds of square kilometers are covered by raised farming platforms (Waru Waru), causeways, canals, and manmade islands in an area that resembles a lake for half the year and is completely dry for the rest of the year. All this, as well, was built by hand. 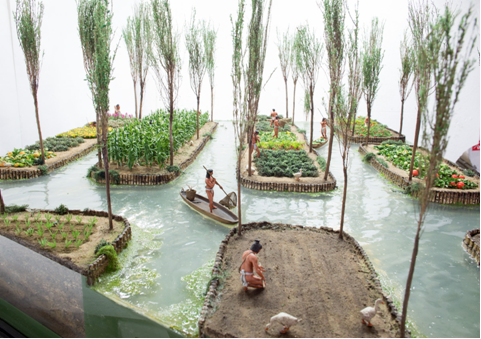 Much of ancient Mexico City was built over a lake, on which the Aztecs built thousands of floating platforms (Chinampas) on which to grow their crops. Other farmers directed rainfall into spiraling holes that led to underground storage chambers. And many indigenous cultures constructed irrigation canals.

The practice shared by all these farming societies was their use of raised beds, covered with thick layers of organic matter, or mulch. It appears that indigenous populations built such systems throughout the Americas. It was arguably their most important method of coping with the climate variability caused by the El Niño/La Niña cycle. The Permaculture Research Institute of Australia has proven the value of this type of system by creating a lush raised-bed garden in the Jordanian desert.

Raised beds, when tied together with ridges every few meters, can retain 100 percent of the rain that falls on the field, compared with less than 10 percent infiltration in a flat, ploughed field. During a drought, it is important to maintain the highest soil moisture content possible.

During periods of excess rain, the beds hold part of the root system up in well-oxygenated soil, above the level of the standing water. This prevents anaerobic decomposition of roots and helps guarantee at least some production. Unlike today, there was no “food aid” available to ancient indigenous peoples.

The raised structures were of variable lengths, but most were about a meter wide. If not formed on elevated platforms or terraces, they were commonly built on the contour to hold water and prevent erosion. When built in depressions, however, they radiated to the center. Crops were planted on the beds as the retained water receded.

The organic mulch shaded the soil, keeping it cool and moist. It also prevented raindrops from eroding the soil surface. As the organic matter decomposed, it provided food for earthworms and myriad other beneficial micro-organisms. Earthworms help aerate and fertilize the soil. A permanent mulch also created the proper environment for mycorrhizal fungi, which help ensure that plants receive nutrients and pest protection.

Heavy rains in the Amazon River Basin severely leach nutrients from the soil, leaving the native soils useless for agricultural production soon after forest is removed. Yet the first conquistadors to enter the Amazon Basin described their encounters with great agricultural societies, living in large cities that endured until European diseases devastated their populations.

These cities were made possible by soil improvement techniques that have only partially survived in a few remote communities of indigenous farmers. For 2,000 years, famers in the rivers of the Amazon Basin were producing fertile soil on which to grow their crops, where no such soil had existed before.

These soils, known as “black earth,” are still fertile 500 years after they were last made. They contain high concentrations of humus, powdered charcoal, and pieces of broken pottery. Although they are located high above the river levels, they contain aquatic plant remains and sand. The sand indicates that the people scooped up the river muck in the dry season and spread it over their beds.

These soils cannot be reproduced simply by adding charred material. The humus is vitally important to the functioning of these soils. Fortunately, there are ways to produce large amounts of humus to recreate these super-fertile soils. Developing these soils today would contribute greatly to efforts to feed a world full of hungry people.

Putting These Methods into Perspective

The United Nations Intergovernmental Panel on Climate Change, in its 2007 assessment, suggests the use of ancient indigenous technologies from the Americas as a means of mitigating the effects of climate change. Evidence indicates that global warming is increasing the frequency and severity of both droughts and inundations.